Visit of our Honorary President in Budapest

Professor Arrow of Stanford University was first President of ISIR between 1982 and 1990 and played a key role in founding and consolidating our Society. He was elected Honorary President in 1990. We have been in contact ever since then, he repeatedly expressed appreciation of ISIR’s activity.
Most of our members know that Professor Arrow besides his absolutely fundamental works in general equilibrium theory, social choice theory and many other fields of economics had published seminal works in inventory theory as well in the 1950s. See for example Optimal Inventory Policy by Kenneth J. Arrow, Theodore Harris, and Jacob Marschak:  http://dido.wss.yale.edu/P/cp/p00a/p0044.pdf 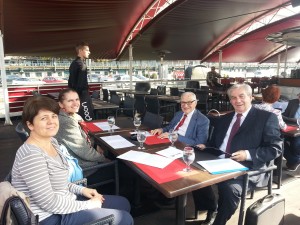